One of the first things I realized when I moved to Atlanta in 1997 was just how difficult it is to take a photograph between 11am and 5pm on a sunny summer day — and summer here lasts pretty much from April until October. The sun appears magnified in its intensity, blowing out all but the darkest shadow areas and leaving only pure white and pure black. Pity the poor photographer, left with nothing in the middle, very few grays, no subtlety. The historical irony of this observance was not lost on me. The South was a new experience for me, and it would take most of a decade for me to be able to say I understood at least a little bit of it.

Mark Steinmetz's South EastBut the technical difficulties of midday photography are real. I shot a political rally a few years ago and found redeemable images only in black and white versions of my photos. The stark midday sun can be brutal, and color film is easily blown out and the result is a flat, washed out image. If you try metering for the shadows, your sky is lost. If you meter for the sky, your shadow details disappear. But black and white can better handle the contrast, and the look is classical.

I say all this in the intro because it influenced how I saw the black and white photos in Mark Steinmetz's book, South East. Mark Steinmetz grew up and lives in Athens, Georgia, about an hour drive east of Atlanta. It's easy to think of Athens as nothing more than the home of the University of Georgia, but having lived in a similar town (State College, PA, home of Penn State) I am very aware of the life and lives that function outside of the university. Thanks to good friends I have been able to explore and get to know Athens over the past few years. It has a strong intellectual environment that has supported a thriving art and music scene. The Indigo Girls, R.E.M., and the B-52s all hail from Athens.

So when I first sat down to explore Steinmetz's South East it was these thoughts that had been on my mind. What Steinmetz delivered to me was a story and a sense of understanding. Many of Steinmetz's photos are portraits, and many of those portraits are of young people. It is these images that touch me most deeply. I could not help but be reminded of Walker Evan's photos of the American South. People, many of them stationary, stoically staring slightly away from the camera's lens, perhaps caught unaware. I was transported into the role of voyeur, but unlike modern reality television, this feeling was not an uncomfortable one.

One has to be careful when setting out to document an area through photography. It would be easy to fall into what Sontag refers to as the "polemical pursuit of the trivial and the vulgar" when attempting to reflect the flavor of a people and place. But I did not come away with that sense after viewing Steinmetz's work. I felt like I did when I was taken on tours of Athens by someone who grew up there. I felt as though I has been given the rare opportunity to glimpse a town through the eyes of a native, through the eyes of someone who understood the conflict inherent in university towns, and in southern towns. This photo book is not a seedy exploration of the underground, but a timeless depiction of daily life. I appreciate Steinmetz's closeness with those in his photos. I wonder how much conversation he had with his subjects before or after the capture of the image. Did he know them? His photos suggest a casualness between artist and model that results in the honesty seen in the photographs.

Looking at South East took me several days. I would look at an image or two and find myself taken back to friends and their stories of life in the American south. Photos that can take me other places are, in my opinion, successful. South East is a wonderful work.

You can see many of Mark Steinmet'z photos on his website. Click on South East to see a selection of photos from the book. 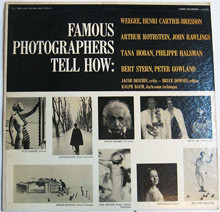 Via PDNPulse and Boogie Woogie Flu comes this fascinating 1958 recording of Henri Cartier-Bresson and Weegee (Arthur Fellig) from an album titled Famous Photographers Tell How.

…you can hear Weegee talk about picture-making. It's interesting to hear his voice, which is one of those accents you don't hear so much in New York anymore: part Austro-Hungarian immigrant by way of the Lower East Side and part Elmer Fudd. Peter Sellers based his accent in Dr. Strangelove on Weegee's voice after Weegee visited Kubrick's set. One of my favorite things in Weegee's classic 1945 book, Naked City is the last chapter called "Camera Tips" where he gives away some of his tricks of the trade. Dated or not, I learned a tremendous amount when I first read it, about picture taking, and about Weegee.

Arthur Fellig adopted the name Weegee or "Weegee the Famous," alluding to the Ouija board and his knack for being first on the scene is in his days as a roving news and street photographer. It wasn't an accident or any supernatural pre-disposition that he was there first at the fires, murders and general mayhem that he recorded in Gotham. Weegee was the first photographer to have a police scanner (originally in his one room tenement flat across the street from NYC police headquarters and later getting another for his Buick). His photographs of New York from the 30s and 40s are iconographic images of the city and it's inhabitants (both high and low) and important photographs, whether he intended them to be or not. It's been suggested that he was naive, and not a sophisticated photographer, but I don't really believe it, and it doesn't really matter. These pictures are as real as it gets, and great works of art. (see Atget) Later in his career, when he got the idea that he was an artiste is when the pictures became less interesting. (see Richard Avedon)…

…Another segment from Famous Photographers Tell How with Henri Cartier-Bresson. Eloquent, dry, and French like the great philosopher/mathematician image maker that he was.

From the Lens comes On Assignment: Covering Tehran, by David W. Dunlap. This interview with photojournalist Newsha Tavakolian is a fascinating story of a young female photographer trying to cover a very rapidly developing story in a male-dominated country and profession.

I read a lot of photography blogs every day and today I ran across this really cool series of videos of young kids testing the durability of the new Olympus Stylus Tough digital camera. They do everything from freezing the cameras in blocks of ice to running over them with their tricycles and dousing them in chocolate syrup — it looks like they had a really fun time. Olympus is to be commended for making and marketing these videos that speak directly to their target audience.