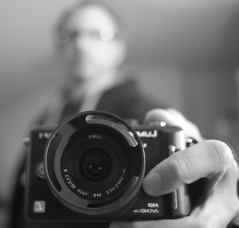 On the latest episode of TWiP’s Street Focus, photographer Valerie Jardin interviews The Copyright Guys (photographer Jack Reznicki and trial lawyer Ed Greenberg). Shortly after the twenty-minute mark they begin a very interesting conversation on photography in public libraries. Worth listening to if you’re interested in such issues.

Norman Oder, writing in Library Journal, reports that Darrell Batson, director of the Frederick County Public Library, turned over two public-access computers to FBI agents investigating the 2001 anthrax attacks.  Library officials claimed that:"Public-access computers are not connected to FCPL’s library patron records. No library patron records were provided to the FBI. Library patrons’ records are not made available to law enforcement authorities without a court order."Library computers are analogous to books and other materials within the library. They may not necessarily be checked out and therefore are not part of the patron's circulation record (though some libraries do view computer reservation systems as analogous to check-out) but they are a library resource being used by a library user. In my opinion this equates to protected use of library materials. If the FBI came in and asked for security camera footage to see what someone was reading, would we turn it over without a warrant? If an officer asked a librarian what magazine article a customer had just been reading, would we provide it?When a library customer comes into our building and makes use of our resources and services, we extend to that user a shield of privacy so long as they agree not to violate our policies or the law. The protective shield of privacy can only be pierced when the individual violates the contract regarding use. If we, the library, witness the violation then it is incumbent upon us to take proper and appropriate action. However, if an outside agency, such as the FBI, comes to us and claims that a law was broken and that we need to turn over anything that could connect our library users with information they sought within our building or while using our services then we need to require that a minimum threshold is met — namely, the production of a warrant. Frederick County Public Library, in my opinion, failed this test.Batson said that "it was a decision I made on my experience and the information given to me."  A library director would never accept this excuse from his staff. Library administrators spend a great deal of time training and reminding staff that under no circumstances should they acquiesce to uniformed intimidation and turn over library records or anything that could identify information seekers and the information they sought to law enforcement without a proper warrant. Library use — information both sought and retrieved — is private data that should never be subject to search and seizure without proper judicial oversight. By turning over public-access computers to federal authorities without a warrant, the Frederick County Public Library has violated the trust of its patrons and violated a basic precept of librarianship. Personal and identifiable data most likely exists on those computers to link people to their searches, email, visited websites, etc. If a crime had been committed then the FBI would have been able to produce a warrant to seize the computers and the library would then turn over the requested items. But library officials did not require that warrant. They turned the computers over to federal agents based solely upon the word of the FBI agent on scene, and in doing so they have set an awful example to librarians everywhere.

Library officials turned over the computers voluntarily to the F.B.I. last week. The Justice Department said it believed it needed a search warrant to examine the contents, and two warrants were approved Thursday by Chief Judge Royce C. Lamberth of Federal District Court for the District of Columbia.

This is a few weeks old but it just came to my attention and I think it speaks volumes about the current environment towards Internet and gaming content. When parents where asked what was more offensive, a "graphically severed human head" or "a man and a woman having sex", more parents said the sex was worse than the severed head!

Read about it on Wired or at ars technica.

In a ruling that's likely to come as a disappointment for privacy rights advocates, the U.S. Court of Appeals for the Ninth Circuit this week held that customs officers need no reasonable suspicion to search through the contents of any individual's laptop at the country's borders.