First let me apologize for not posting in so long. Things sort of came to a halt in late June when a close family member was diagnosed with cancer. Then, literally the same day, some medical issues that I dealt with as a young child decided to come roaring back and make a most unwelcome reappearance. So, over the past two months I've been a bit busy dealing with my own issues while at the same time trying to travel back and forth between Atlanta and Philadelphia to visit a close relative undergoing chemo. To top it all off, my library decided that this was a good time to make it into the news.

But amidst crisis comes opportunity, right? And if there is one thing I've found over the years, there's nothing like a crisis to give you a bit more energy to take on even more tasks and projects. So, I'll be trying to add some useful and interesting content here over the next few months, but I do ask for everyone's understanding if it is sometimes sporadic, emotional, or opinionated. Thanks!

Having just written about social software and national security, I find the situation in Iran to be rather fascinating. It's amazing to see the huge role that social sites are playing in the 2009 Iranian election and, perhaps, the 2009 revolution.

Social Networks Spread Iranian Defiance Online – Iranians are blogging, posting to Facebook and, most visibly, coordinating their protests on Twitter, the messaging service. Their activity has increased, not decreased, since the presidential election on Friday and ensuing attempts by the government to restrict or censor their online communications.

Flickr coverage from mousavi1388 and Dateline: Iran. (Warning: some of the images are graphic and contain violent scenes not suited for some audiences.) 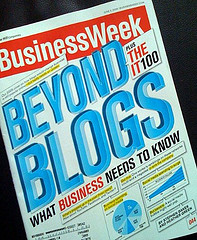 This is the free version of Mofuse — you have to link to a unique URL. The full version is $3 a month but can go directly to your own URL.

If you have a mobile, give it a try.